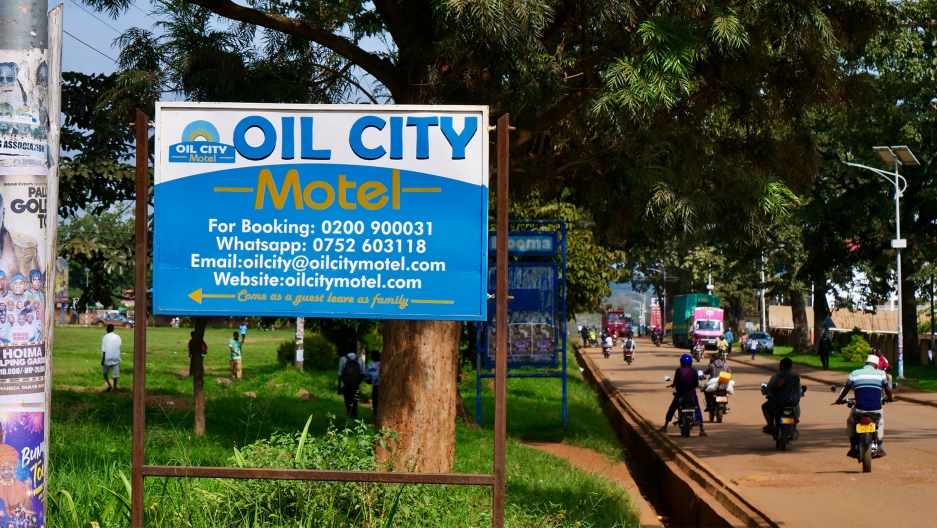 In the far ends of western Uganda, surrounded by lush green farms, the city of Hoima has taken on a new name: Oil City.

It got the name after commercial quantities of oil were discovered in Uganda in 2006.

According to the country’s government, there are 6.5 billion barrels of oil underground — 1.4 billion of which can be recovered.

Now, Uganda is seeking to develop and refine that oil in partnership with the French energy company Total, and a state-owned Chinese corporation.

“People will benefit directly, others indirectly,” said 22-year-old Nicholas Aheebua, who works at a local market.

He pointed out the sleek new roads that have been built in the district, and the nearly finished international airport.

“Like us, youths, who are still looking for work,” he added. “People who have benefited directly will start up businesses and we shall work there. We’ll be employed.”

The Ugandan government is banking on these prospects of employment and development as they promote, and defend, this oil project in the face of domestic and international criticism about the environmental and social costs.

“We estimate that the country will be earning close to $2 billion annually, and this is a significant addition to our GDP,” said Gloria Sebikari of the Petroleum Authority of Uganda (PAU).

She said it will also help boost Uganda’s energy security.

“Uganda plans to construct a 60,000-barrels-per-day refinery in Hoima to produce petroleum products like petrol, diesel, jet fuel and the like to be consumed in the Ugandan market,” Sebikari said.

Crude oil from the projects will also be exported internationally through the East African Crude Oil Pipeline (EACOP) that will run more than 890 miles from western Uganda to the Tanga port in neighboring Tanzania.

But some have raised concerns about the oil development project.

In September, the European Parliament adopted a resolution condemning human rights violations and environmental dangers they said have been brought by the fossil fuel projects in Uganda.

But Uganda disagrees with the assessment.

“Some of these people are insufferable. You need to control yourself not to explode. So shallow, so egocentric. So wrong,” said Uganda’s President Yoweri Museveni in response.

This flashpoint is emblematic of a bigger showdown taking place on the continent, as many African countries seek to benefit from new fossil fuel discoveries despite global calls for a movement away from it.

While those calls were repeated once again at the UN Climate Conference in Egypt, Sebikari of PAU noted how investment in new fossil fuel projects remains a reality globally.

“This begs the question, why should the pressure to stop oil and gas or to delay projects be for projects in developing countries, countries that have not yet reached a certain level of development?” she asked.

“A lot of the [developed] countries developed on the back of oil and gas and other natural resources,”

“A lot of the [developed] countries developed on the back of oil and gas and other natural resources,” she added.

Uganda’s government argues that it should be able to do the same, especially when many people in the country do not even have access to electricity.

Instead, both the rural and urban poor rely on burning charcoal and firewood, which has led to deforestation across Uganda’s protected forest and carbon emissions.

Sebikari of PAU said that one of the expected byproducts of the oil refining process will be liquefied petroleum gas (LPG) — or cooking gas — which can be used as an alternative to charcoal and wood.

“So, if the oil and gas sectors can support a bigger part of the population to transition away from the use of charcoal and wood fuel [toward the] use of gas, which is much cleaner than wood fuel, then we are contributing to the fight against climate change. We are reducing our emissions as a country,” she argued.

This year, Uganda’s Ministry of Energy launched a program to give canisters of cooking gas to poor families in anticipation of growing the domestic market in the future.

“Gas is more efficient, faster and cleaner than using charcoal or wood,” said 37-year-old Noowe Kazo, one of the recipients.

“The government told us that we should stop using charcoal, because the smoke is bad for us, and because it’s damaging our environment,” she said.

She added that she would be willing to buy gas with her own money if it were more affordable.

For Uganda’s government, Kazo exemplifies its argument that oil development can be part of the country’s energy transition.

But for environment and social activists, the costs of the country’s oil development are too high.

The World has more on the pushback against this oil pipeline in Part 2 of this report. Listen to the story here.

Related: ‘The system is broken’: At COP27, developing countries push for more money to adapt to climate change