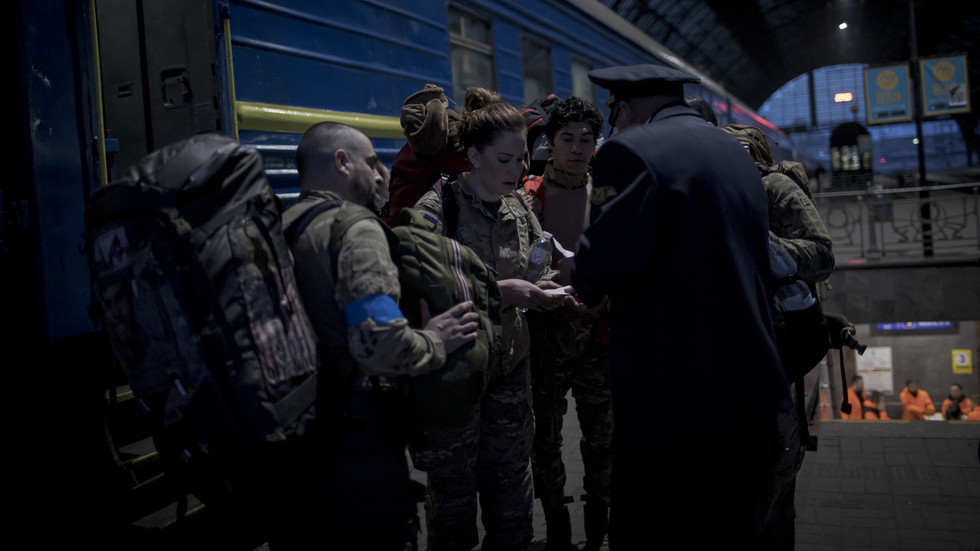 Americans and other foreign fighters, who had come to help the Ukrainian military repel the Russian offensive and have now returned home, have spoken of their disappointment to the Washington Post.

They lamented, among other things, a lack of equipment and weapons, and poor lines of communication.

One of the fighters who agreed to speak to the paper, asked to be named only by his first name, Dakota, over concerns for his own safety and that of his family. Being a US Marine Corps veteran, the man arrived in Ukraine just days after Russia launched its military operation.

He and several other foreign fighters were reportedly tasked with assisting and training Ukrainian troops in the use of US-made anti-tank Javelin missiles. In early March, the Ukrainian unit Dakota was attached to, he told the American daily, was deployed to an unnamed town northwest of Kiev, where they came under heavy Russian fire. The Marine Corps veteran recalled that while his unit had been issued Javelins and other anti-tank weapons, they had no batteries for the launch units, which effectively rendered the missiles unusable.

After just two nights under heavy Russian artillery bombardment, eight out of twenty foreign fighters from Dakota’s unit abandoned their positions, according to the man. He claimed that a fellow US Marine veteran had seemed to break his machine gun with a rock, apparently hoping to pass it off as battle damage, while another one had feigned injury.

The US national eventually returned home after he had been diagnosed with a brain injury, which as he said, was likely the result of him having been too close to shelling.

Another US army veteran, Dane Miller, who did not take part in the actual fighting in Ukraine but rather helped assess prospective foreign fighters’ military records in Poland, told the Post that some of the volunteers had overestimated their military experience. According to Miller, not all of the men wishing to fight for Ukraine had been in combat before, despite being military veterans, while others had only taken part in limited counter-insurgency operations. As a result, he had to advise some of the aspiring fighters, who were apparently driven by “this idea of heroism,” against going to Ukraine.

The American outlet also interviewed a German army veteran, Pascal. He was on a team with 22-year-old Willy Joseph Cancel, a US Marine Corps veteran who was allegedly killed in the vicinity of the Southern Ukrainian city of Nikolayev in late April.

Pascal told the paper that problems had begun right from the start of their deployment, with the group of foreign fighters he was part of suspecting that their two-way radios were being monitored by Russian forces. To make matters worse, his unit lacked extra batteries, meaning that the fighters often ended up using unsecured cell phones and WhatsApp. The German national stated that he based his suspicions on the fact that soon after the fighters in his unit had exchanged plans via one of these communication methods, their positions would come under Russian artillery shelling.

According to Pascal, the foreign fighters had felt underinformed, often not even having a clear idea of where they were and where the Russian army’s positions were. The day Cancel was killed, their unit had come under fire from a position they had thought was Ukrainian, the German army veteran claimed. He explained that their unit had had no radio communication to confirm this, however.

“From the beginning, we had no chance,” Pascal concluded.

The exact circumstances of his US comrade’s death are, to date, not known, with Cancel’s body still not recovered.

A Ukrainian-born US citizen, who asked to be identified only by his radio call sign only –Texas– told the Post that he had decided to join the fray despite having no prior military experience. The man also acknowledged that following his tour to Ukraine, peaceful life at home began to look increasingly dull.

“Once you see that life-and-death contrast, and you come back to a peaceful life and a peaceful job,” the man explained, “everything seems to be less meaningful by comparison.”

Texas said he was tempted every day to return to the battlefield.

Shortly after Moscow launched its assault on Ukraine in late February, volunteers and mercenaries from foreign countries made their way to the battlefield to join the fight against Russian forces. Some ended up being captured.

Three suspected mercenaries from the UK and Morocco, who joined the Ukrainian military and were later captured by the forces of the Donetsk People’s Republic (DPR), could be now be facing the death penalty there, the republic’s General Prosecutor’s Office said on Friday. A criminal case against them has been sent to court.