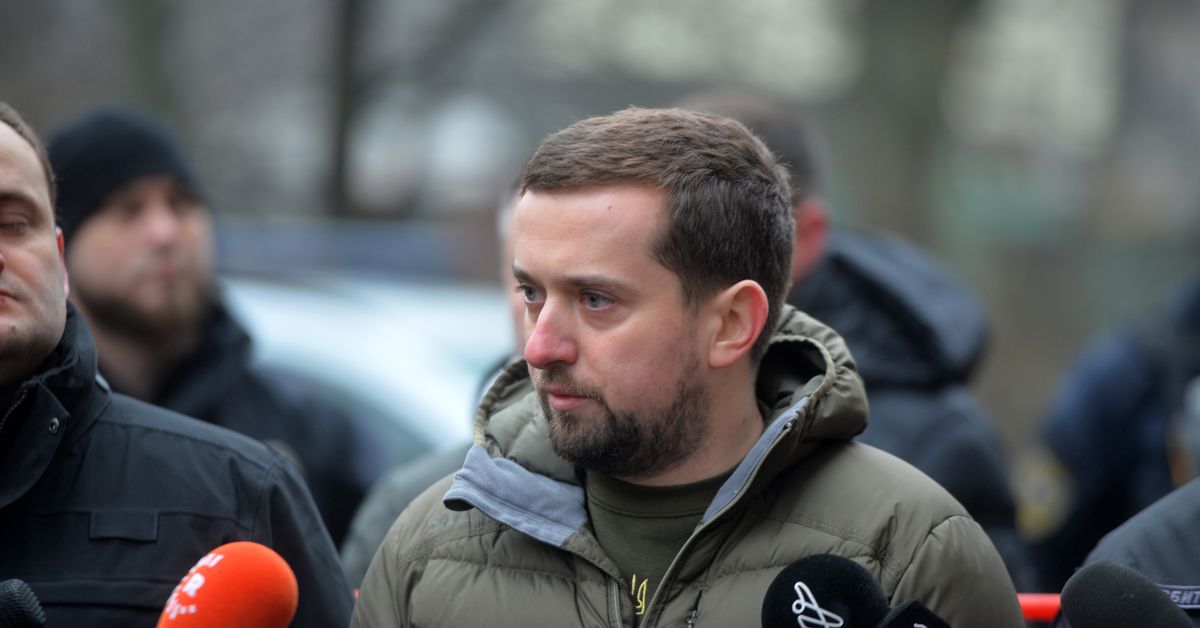 A corruption scandal is shaking up the Ukrainian government, with top officials stepping aside as Kyiv seems eager to assure Western partners of their responsible stewardship of billions in military and economic aid.

Among the high-profile exits are Kyrylo Tymoshenko, deputy head in the office of Ukrainian President Volodymyr Zelenskyy, and a deputy in the ministry of defense, Vyacheslav Shapovalov, who was responsible for overseeing supplies and food for troops. A deputy prosecutor general was also sacked, as were a handful of regional governors and a few other government ministers.

The actual details of what prompted the shake-up are a bit murky, and not all of the resignations and ousters appear to be related, but it comes after at least one report in Ukrainian media that the Ministry of Defense had purchased food for troops at extra-high prices. The Ministry of Defense had said the allegations were a deliberate attempt to mislead, but said it would conduct an internal audit. Additional media reports in the past week had questioned officials, including Tymoshenko, who appeared to be enjoying lavish lifestyles.

This represents the most high-profile reshuffle since Russia’s invasion last year. More details about the alleged graft are likely to emerge, but it seems clear that Zelenskyy’s government moved fast to tamp down any allegations of widespread corruption, especially from international backers who are providing tens of billions of dollars in assistance that Ukraine depends on in its fight against Russia. Some critics have also suggested the shake-up is more of a political move, rather than a genuine anti-corruption effort.

In his Tuesday evening address, posted on Telegram, Zelenskyy acknowledged the personnel shifts and said that any internal problems “that hinder the state are being cleaned up and will be cleaned up. It is fair, it is necessary for our defense and it helps our rapprochement with European institutions.”

Ukraine has previously struggled to root out high-level corruption and bolster the rule of law, despite Zelenskyy promising to do so when he was elected in 2019. Ukraine’s backers in the United States and Europe had long put pressure on Kyiv to deal with these issues, especially as a condition for Ukraine’s invitation into Western institutions, including perhaps one day joining the European Union. Russia’s full-scale attack last year shunted some of those corruption concerns aside, as Western governments rushed to back up Ukraine and as Ukraine itself became a global symbol for democratic resistance.

Within Ukraine, some civil society groups and anti-corruption forces who’d long been critical of the Ukrainian government and Zelenskyy put on hold some of their activism as Ukrainian society fully mobilized in the war effort. According to a report on war and corruption in Ukraine released last summer, about 84 percent of anti-corruption experts abandoned their activities because of the conflict.

Still, concerns about Ukraine’s approach to corruption never totally dissipated. The chaos of conflict — lots of rapid procurements, an influx of funds and supplies moving through many hands — tends to be fertile areas for potential graft and can exacerbate existing problems. This is true no matter where the war or who’s doing the fighting. Ukraine is no exception.

What we know about the Ukrainian government shake-ups

The recent reshuffle appears to be connected to a few different scandals. Perhaps the most high-profile is this allegation, first reported in the Ukrainian media outlet ZN.UA, that the Ukrainian Ministry of Defense had signed a contract paying two to three times more for food than retail prices in Kyiv. Defense Minister Oleksiy Reznikov rejected the claims, saying it was a “technical error” and suggesting the leak was timed to a meeting of Western donors, in an effort to undermine Ukraine. “Information about the content of food service shoppers who have taken up public space is spreading with signs of deliberate manipulation and mislead,” the ministry said in a statement. The ministry said it was opening an investigation into the “spread of intentionally false information,” though it was also conducting an internal audit.

In response to the procurement allegations, the National Anti-Corruption Bureau of Ukraine (NABU) publicly announced its own investigation. On Tuesday, Deputy Defense Minister Viacheslav Shapovalov reportedly asked to be dismissed, so as “not to pose a threat to the stable supply of the Armed Forces of Ukraine as a result of a campaign of accusations related to the purchase of food services.”

But Ukraine’s government shake-up extends beyond that. On Tuesday, Tymoshenko, a close aide to Zelenskyy, announced his resignation, saying it was of his “own volition.” Tymoshenko had a fairly public-facing role during the war, and Ukrainian media had reported last year that he had driven an SUV donated for humanitarian purposes for his personal use (he denied that report). In December, another investigation suggested Tymoshenko had been driving an expensive sports car, and had rented a mansion belonging to a prominent businessman — flashy accessories for a government official in wartime. Tymoshenko has said he rents the house because his own is in an area targeted by airstrikes.

Oleksiy Symonenko, a deputy prosecutor general, was also ousted, following reports last month in Ukrainian media that he had gone on a 10-day holiday in Spain during the war. On Monday, Zelenskyy banned all government officials from leaving the country for anything other than official business.

In addition to these high-profile ousters, a few other deputy ministers and regional governors — including those in Kyiv and Kherson Oblasts — were also fired. According to the Kyiv Independent, some of these officials have been implicated in graft, while others appear to have just been caught up in the reshuffle.

This turmoil also comes days after Ukraine’s deputy infrastructure minister, Vasyl Lozinskyi, was fired following allegations from Ukrainian prosecutors that he stole $400,000 (£320,000) that was intended to go to the purchase of aid, including generators, to help Ukrainians withstand the winter after Russian attacks badly damaged energy infrastructure. He has not commented on the allegations.

Ukraine corruption is a focus again, a year into war

A few firings and resignations will not fix endemic corruption or rule of law problems in Ukraine, just as Ukraine’s resistance against Moscow will not erase all of its underlying governance weaknesses. A bigger question is how widespread these latest instances of corruption are, and whether the ousters and resignations now represent a real and sustained effort to crack down or are more a political reshuffle and a public show to reassure Western partners and the Ukrainian public.

An aid to Zelenskyy tweeted that the moves show the government won’t turn any “blind eyes” to misdeeds. Yet some critics have suggested this is more of a political shake-up, and that other politicians accused of corruption remain in their posts.

In 2021, Transparency International had ranked Ukraine 122 among 180 countries for corruption, making it one of the worst offenders. Even on the eve of Russia’s invasion, the United States and European partners had continued to put pressure on Zelenskyy to implement anti-corruption and rule of law reforms. Those calls didn’t stop once the war commenced, but the focus, with legitimate reason, was on supporting Ukraine’s resistance to Russia and providing military, humanitarian, and economic aid to Kyiv.

Within Ukraine, too, some of the government’s biggest critics redirected their energies to the larger war effort, according to a survey of 169 anti-corruption experts who responded in April 2022. Around 47 percent reported feeling endangered if they continued to fight corruption during the conflict.

This, of course, is why war and conflict can deepen corruption. Ukraine is fighting for its existence as a state, so, naturally, that’s the priority above all else. Government resources, attention, and funding all go to mobilizing for that, which means anti-corruption efforts and rule of law reforms fall by the wayside. On top of that, war creates plenty of opportunities for graft, with less time and attention on accountability and oversight.

The recent allegations come nearly one year into the war as the West once again gears up to send Ukrainian massive tranches of weapons — including, now, reportedly advanced US tanks. The US alone has contributed about $100 billion toward Ukraine, including military, security, and economic assistance. As of November, European countries and EU institutions have pledged more than €51 billion in assistance to Ukraine, according to the Kiel Institute for the World Economy. As the war drags on, some Western lawmakers are questioning the amount of aid flowing to Ukraine — and are calling for more accountability on where everything is going. That includes some of the newly sworn-in Republican majority in the US House. Kyiv relies on foreign support in its fight against Russia, and repeated hints of misuse may jeopardize that, so it’s not surprising Kyiv is moving quickly to respond.

And that is perhaps one of the big questions: How much of this is for optics, and how much does this reflect a deeper commitment on those corruption promises? The US lauded Ukraine for making these moves, but a lot will depend on how the investigations play out and what they uncover. Still, Ukraine’s efforts to signal to the world — and a domestic audience who’s sacrificed a lot for the war — still carry a warning to other officials.


Google Pay. You can also contribute via