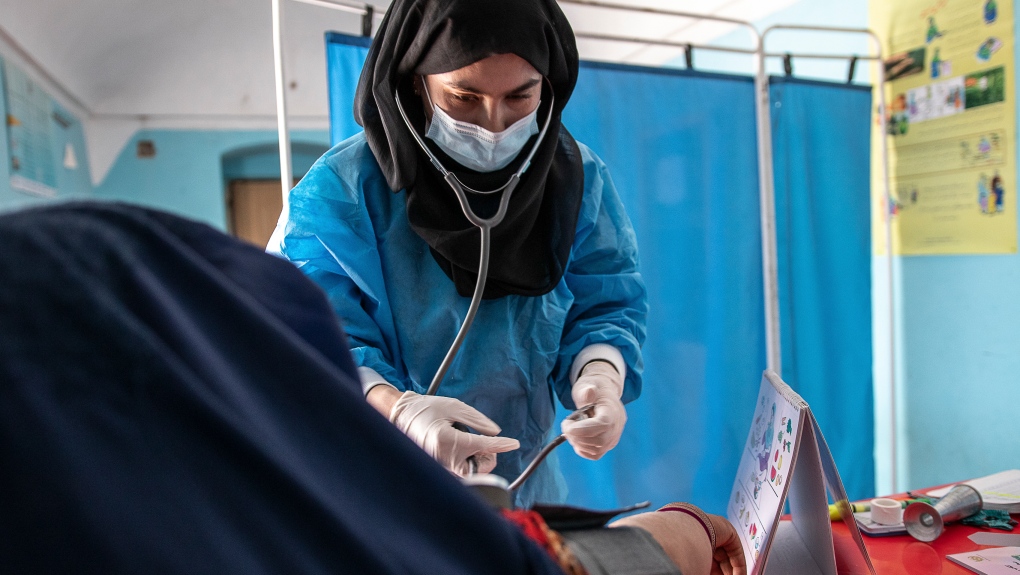 
The highest-ranking woman at the United Nations said Wednesday she used everything in her “toolbox” during meetings with Taliban ministers to try to reverse their crackdown on Afghan women and girls, and she urged Muslim countries to help the Taliban move from the “13th century to the 21st.”


Deputy Secretary-General Amina Mohammed, a former Nigerian Cabinet minister and a Muslim, said at a news conference that four Taliban ministers, including the foreign minister and a deputy prime minister, spoke “off one script” during meetings with her delegation last week.


She said the officials sought to stress things that they say they have done and not gotten recognition for – and what they called their effort to create an environment that protects women.


“Their definition of protection would be, I would say, ours of oppression,” Mohammed said.


Those meetings in the Afghan capital, Kabul, and the Islamic group’s birthplace in Kandahar were followed by a visit this week by UN humanitarian chief Martin Griffiths and heads of major aid groups. They are pressing the Taliban to reverse their edict last month banning Afghan women from working for national and international non-governmental groups.


Speaking from Kabul on Wednesday, Griffiths said the focus of the visit was to get the Taliban to understand that getting aid operations up and running and allowing women to work in them was critical. The delegation’s message was simple – that the ban makes the groups’ work more difficult, he said.


“What I heard from all those I met (was) that they understood the need as well as the right for Afghan women to work, and that they will be working on a set of guidelines which we will see issued in due course, which will respond to those requirements,” Griffiths said.


Mohammed said her delegation, including the head of UN Women, which promotes gender equality and women’s rights, pushed back against the Taliban, including when they started talking about humanitarian principles.


“We reminded them that in humanitarian principles, non-discrimination was a key part â€¦ and that they were wiping out women from the workplace,” she said.


As a Sunni Muslim, like the Taliban officials, Mohammed said she told the ministers that when it comes to preventing girls’ education beyond sixth grade and taking away women’s rights, they are not following Islam and are harming people.


In one setting, Mohammed said, she was told by a Taliban official she didn’t name that “it was haram (forbidden by Islamic law) for me to be there talking to them.” These conservatives won’t look straight at a woman, she noted, so she said she played “that game” and didn’t look directly at them either.


Mohammed said the Taliban have said that in due course the rights taken away from women and girls will come back so the UN delegation pressed for a timeline. “What they would say was `soon,”’ she said.


The Taliban took power for a second time in August 2021, during the final weeks of the U.S. and NATO forces’ pullout from Afghanistan after 20 years of war.


Mohammed said the Taliban, who have not been recognized by a single country, want international recognition and Afghanistan’s seat at the United Nations, which is currently held by the former government led by Ashraf Ghani.


“Recognition is one leverage that we have and we should hold onto,” Mohammed said.


Before arriving in Kabul, Mohammed’s delegation traveled to Muslim majority countries, including Indonesia, Turkey, Gulf states and Saudi Arabia, where she said there was wide support against the Taliban bans.


She said there is a proposal for the UN and the 57-member Organization of Islamic Cooperation to host an international conference in mid-March on women in the Muslim world.


“It’s very important that the Muslim countries come together,” she said. “We have to take the fight to the region and we need to be bold about it and courageous about it because women’s rights matter.”


Griffiths, the undersecretary-general for humanitarian affairs, and his delegation, including the heads of Care International and Save the Children U.S., did not travel to Kandahar, where the ban on Afghan women working for NGOs was issued on the orders of the reclusive Taliban supreme leader, Hibatullah Akhundzdaza.


Griffiths acknowledged Akhundzada’s top status but said there are many important voices among Taliban officials across the country.


Save the Children’s Janti Soeripto said that there were meetings with eight ministries in two days and that some among the Taliban seemed to understand the need to reverse the ban.


“There’s resistance, they don’t want to be seen doing a U-turn,” she said. “If people don’t see the consequences as viscerally as we see them, people will feel less inclined.”


Mohammed said it is important for the UN and its partners to work more in some 20 Afghan provinces that are more forward leaning.


“A lot of what we have to deal with is how we travel the Taliban from the 13th century to the 21st,” she said. “That’s a journey. So it’s not just overnight.”


She said the Taliban told her delegation that it is putting forward a law against gender-based violence, which she called “a big plus” because rape and other attacks are increasing in Afghanistan.


“I want to hold the Taliban to champion implementing that law,” she said.


Mohammed said it is important to maximize whatever leverage there is to bring the Taliban back to the principles underpinning participation in the “international family.”


“No one objects to a Muslim country or Sharia (law),” she said. “But all of this cannot be re-engineered to extremism and taking views that harm women and girls. This is absolutely unacceptable, and we should hold the line.”