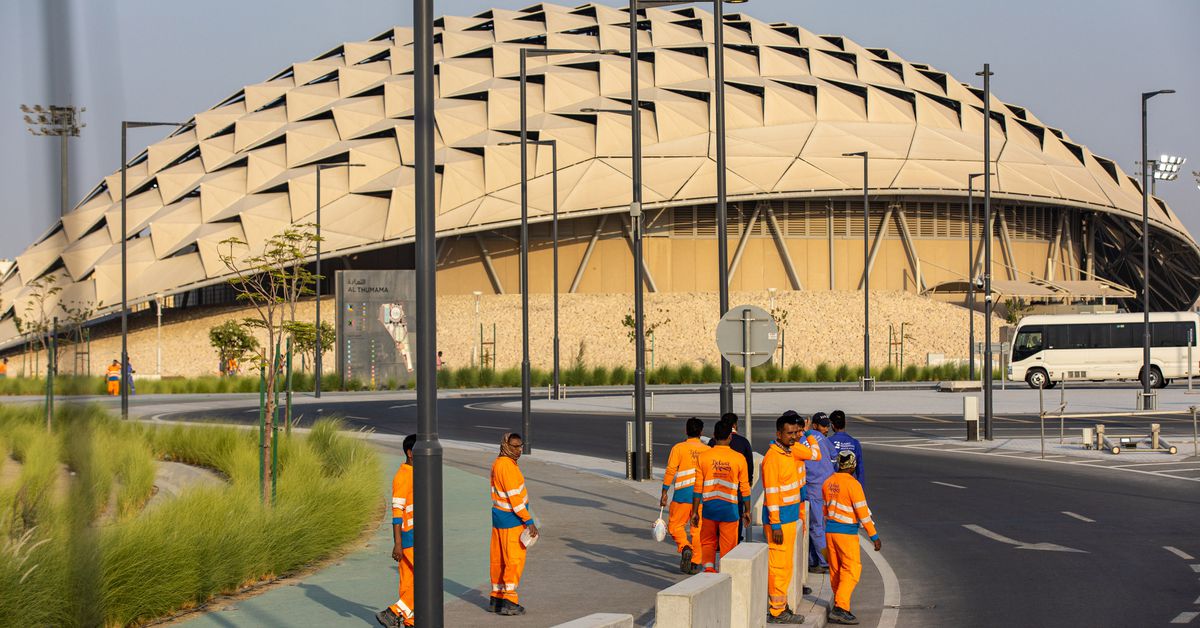 Qatar is a player. In the Middle East and across the world, the petrostate of fewer than 3 million people plays an outsized role in geopolitics, media, and art. Its cultural diplomacy has established the country’s influence — and now it’s doing the same with sport.

The country’s absurd wealth is on display this month: It spent about $300 billion on stadiums and groundwork to host the 2022 FIFA World Cup, which kicked off Sunday. That money totaled more than all previous World Cups and Olympics combined.

Qatar exports more liquified natural gas than any other country. Its energy resources have made the royal family among the world’s richest, and with a $335 billion sovereign wealth fund, it is one of the biggest landowners in the United Kingdom, and owns a major stake in the Empire State Building.

Yet Qatar has arguably been a more strategic spender than neighboring oil-rich states. It has focused on successfully constructing domestic cultural and educational institutions for Qataris and creating a national identity. But it’s a national identity presented by the royal family that does not tolerate dissent and does not guarantee human rights.

The achievement of the first World Cup being convened in the Arab world embodies those tensions: Qatar is a state that uses its immense wealth and power to elevate itself and the region, that cares deeply about culture, and yet has few freedoms.

Doha rapidly developed in recent decades from a small port to a dramatic cityscape in what Qatari artist Sophia Al-Maria describes as “Gulf Futurism.”

Yet for all its lavish spending and foreign-policy influence, Qatar has managed to avoid criticism over the years for restricting rights for women and LGBTQ people and labor violations, including relative silence from its Western allies. (It must help that it’s home to the largest US military base in the Middle East.)

The incredible development of World Cup arenas mirrors Qatar’s staggering art investments. The sister of Qatar’s emir and the head of its network of museums, Sheikha al-Mayassa bint Hamad bin Khalifa al-Thani, reportedly spends about $1 billion annually on art. That’s much higher than any major US museum.

Qatar has commissioned epic works by Western artists, like Richard Serra’s hulking steel plates in the desert (“East-West/West-East”) and Damien Hirst’s series of large bronze sculptures, some 46 feet high, of human reproduction from conception to embryo (“The Miraculous Journey”). Qatar has also bought some of the most expensive paintings in the world: Rothko’s “White Center” ($70 million), Cézanne’s “The Card Players” ($250 million), and Gauguin’s “When Will You Marry?” ($300 million).

There has been a huge emphasis on “starchitects” — largely American and European architects building outlandish structures that few other countries could afford, among them Rem Koolhaas and Jean Nouvel.

But Qatar, importantly, hasn’t only imported from the West.

It has created institutions that have helped forge its national identities as a Muslim and Arab country. The breathtakingly minimalist Museum of Islamic Art in Doha’s center, designed by famed Chinese architect I.M. Pei, contains a remarkable international collection. On the outskirts of Education City, among satellites of universities like Georgetown, Northwestern, and Virginia Commonwealth, is the Mathaf: Arab Museum of Modern Art, which contains one of the most extensive collections of 20th-century Arab art. (Qatar and the UAE are engaged in a cutthroat race to buy up Arab modern art from across the Middle East.) And part of the capital has a new downtown made to look old, called Msheireb, with many cultural museums including one focused on the country’s history of slavery.

“Qatar has always been much more connected, if you will, to that sense of their own past and their historical memory,” Kishwar Rizvi, a professor of art at Yale University, told me. “There’s this global stage on which they want to present themselves,” she explained, but also a sense that, “We have oil, wealth, and all of that, but we also need cultural capital, because that also is part of what makes a nation.”

Perhaps because Qatar’s cultural investments have been so savvy, I’ve been taken aback by the ostentatiousness of its World Cup stadiums. One stadium is shaped like a traditional Qatari tent and another is made of shipping containers. Most of the marquee stadiums for world sporting events are showy or trying to represent the host country’s culture, but with this year’s, everything looks ornamental or too obvious.

The starchitects’ result in Qatar is the lowest common denominator, a country reduced to stereotypes. “I think it shows a lack of imagination,” says Rizvi. These new stadiums stand in contrast, she says, to Le Corbusier’s modernist Olympic Stadium designed for Baghdad in the 1950s.

That lack of imagination is so striking because so much of Qatar’s soft-power prowess has had impressive results in art, culture, education, and media.

I visited Qatar in 2016 to attend a blue-chip conference of artists and architects, all presided over by Sheikha al-Mayassa. Conceptual artist Marina Abramović equated her and Qatar’s royal family to modern-day Medicis, with the funds to support artists like Serra in creating monumental works.

That money, it seems, does buy the complicity of powerful people. “To just come and criticize, it’s such an easy way to close the culture forever, but I want to open this culture,” Abramović told me.

On the sidelines of the swish confab at the W Hotel Doha, I interviewed Jeff Koons, one of the world’s most expensive living artists and a frequent guest of the royal family. I asked him: Why Qatar? “I would say because of the openness of Qatar to ideas, to education, to the humanities, to psychology and philosophy and all the different things that can stimulate the public for growth and development,” he told me.

I pushed Koons to discuss reported labor violations, that his nudes could never be exhibited in the conservative country, and the fact that a Qatari poet was imprisoned at the time for a protest song. “Going back to some of the problems here in Qatar and these different things, I’m naïve of some of the aspects,” Koons told me. “I know that internationally there has been a movement to try to make working conditions better for laborers, and I think that a lot of problems, not only here but internationally, have been addressed to try to make situations where, if abuses take place, they’re corrected.”

Qatar is a monarchy with a large expat and migrant labor population that has very limited rights. Migrant workers can’t join labor unions. The Guardian has reported that 6,500 migrant workers died over a decade, and a Kenyan blogger who wrote about it was arrested in 2021.

Beyond that, women are stifled by guardianship laws, LGBTQ people lack rights, and internet activists have been imprisoned. The courts are not independent, the press cannot freely cover the country’s politics, and there are no serious elections for leadership and no political parties.

“If you’re in Qatar, and your rights are trampled on as a woman or as a queer person or anything, if you don’t like it, you’re just thrown into jail and good luck,” Wafa Ben-Hassine, a human rights attorney based in Washington, DC, told me. “It’s like you have certain rights and freedoms only if you belong to a certain class of protected people” — the wealthy or certain expats — “then they become not human rights.”

Qatar has largely eluded scrutiny over the years. Now that the country is getting so much attention, there have been some articles criticizing a double standard that Qatar is being held to. But Ben-Hassine said that scrutiny is merited.

“I’m happy that an Arab nation is hosting one of the most lucrative spectacles in the world,” Ben-Hassine said. “But it can be better, and it should do better. We should be clear-eyed about the state of affairs that this country has and aim to hold it to the highest standards.”

And it’s not just about Qatar. It’s about the world systems in which Qatar operates, and the ways in which the tournament serves Western interests, as Guardian columnist Nesrine Malik writes, at the expense of those who lack rights in Qatar.

Nasser Rabbat, a professor of Islamic architecture at MIT, put it this way: “I don’t want to absolve the patrons, the contractors, and the builders, from the amazing human rights violations they have sustained all these years. I’m not going to come to the defense of any of these countries in saying that their labor treatment is acceptable. It is absolutely unacceptable. But I’m not going to blame them as well.”

“Because, at the end of the day, those who are making the most amount of money from the construction boom in the Gulf are companies from our part of the world, from the United States and from Europe,” Rabbat told me. “They are responsible for the deaths of hundreds, if not thousands, of workers, but we too are responsible for those deaths. And we too have benefited from those deaths.”

So the World Cup — with the blitz of global media and the arrival of a million visitors — exposes Qatar to new pressures from the outside. In welcoming teams and fans from around the globe, the cameras may reveal the country’s limitations. Qatar’s deep investments in culture can’t shield it from criticism for the shallowness of rights there.

Understanding America’s political sphere can be overwhelming. That’s where Vox comes in. We aim to give research-driven, smart, and accessible information to everyone who wants it.

Reader gifts support this mission by helping to keep our work free — whether we’re adding nuanced context to unexpected events or explaining how our democracy got to this point. While we’re committed to keeping Vox free, our distinctive brand of explanatory journalism does take a lot of resources. Advertising alone isn’t enough to support it. Help keep work like this free for all by making a gift to Vox today.


Google Pay. You can also contribute via