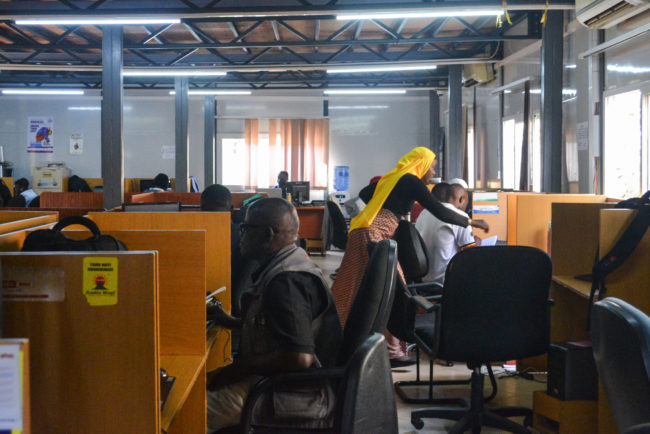 MBARARA, UGANDA — When Eli Akiza began working as a news reporter, he was excited to put what he had learned in journalism school into practice. For a while, the job was as gratifying as he had imagined. The compensation wasn’t bad either. But four years later, he feels like his career has gone through a lifetime of changes.

“When I compare the work I put in and the earnings per story, I feel we could have been paid more,” he says.

Clad in a white T-shirt, Akiza, 29, sits at a desk in front of a laptop in a dimly lit newsroom in Mbarara, a city in western Uganda, as he reflects on the few years he has been in the profession. He is a reporter at Vision Group, a multilingual conglomerate that owns newspapers, magazines, television studios, radio stations and commercial printing and distribution businesses. Fortunately, Akiza says, his pay hasn’t declined since the coronavirus pandemic began, but he worries about the impact prolonged economic consequences of the pandemic could have on his journalistic integrity.

Many Ugandan newsrooms are struggling to recover from the economic consequences of the pandemic, raising concerns that the prolonged financial hardship could jeopardize the integrity of journalism by forcing reporters to accept cash from powerful sources. Many media houses have shut down bureaus across the country because they cannot afford to pay journalists. Companies like Vision Group have suspended publishing of local language newspapers that can no longer generate advertising revenue, leaving only English-language publications operating, says Fredrick Mugira, a senior news producer at the company.

Journalists who are lucky to still be employed say their work has become harder as news media have cut staff and allowances for travel and other expenses, leading many to accept money from some sources they write about. Known metaphorically as “brown envelopes,” the handing out of money by sources, which used to be frowned upon, has become widely acceptable as more journalists find themselves overworked and struggling to cover costs associated with their reporting. 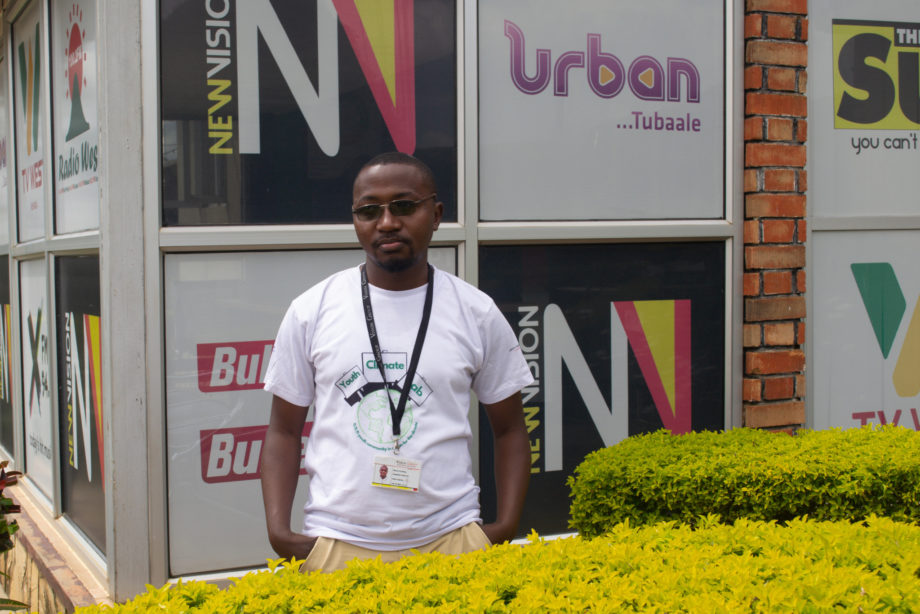 Eli Akiza, a reporter with Vision Group, worries about the impact prolonged economic consequences of the coronavirus pandemic could have on his journalistic integrity.

A survey by the African Centre for Media Excellence, a nonprofit that promotes excellence in journalism, reported that about three-quarters of Ugandan journalists earn no more than 1 million Ugandan shillings ($260) a month, and fewer than 10% earn more than 2 million shillings ($520). The report, which was released in June 2021, attributes the low salaries to dwindling newspaper advertising revenue due to declining sales during the pandemic. Nearly a quarter of journalists surveyed said it was justified to accept a brown envelope occasionally, and 9.5% said it was always justified. The rate of journalists outside Kampala who said it was justified to accept money from sources was much higher, at about 35%.

Mathias Rukundo, the president of the Uganda Journalists Association, acknowledges that some journalists accept money from sources but says the organization does not approve the practice because it endangers the independence of the profession.

“We condemn any journalist who receives anything as pay beyond salary from the employer,” Rukundo says. “Anything a journalist receives without exchange for goods or services amounts to a bribe.”

But Immaculate Owomugisha Bazare, the head of advocacy and litigation at the Uganda Network on Law, Ethics and HIV/AIDS, a nonprofit that promotes human rights in the context of health, disagrees that paying journalists amounts to bribery. She says her organization not only pays reporters who attend its events up to 100,000 shillings ($26) to offset their expenses but also accepts unsolicited proposals from journalists it pays for coverage because that is often cheaper than buying advertising. She says journalists the group works with find their own angles and do their own investigations without influence from the organization.

“We just help them with transportation costs because most of them walk to our events,” she says.

While John Baptist Imokola, an assistant lecturer at Makerere University’s Department of Journalism and Communication, agrees that accepting brown envelopes undermines the integrity of journalism, he says rural journalists often find themselves with no choice. The fact that more of them say they don’t see anything wrong with accepting money from sources is a reflection of how much worse their pay and working conditions are, compared with those in urban areas. He says some journalists in small towns get paid as little as 2,000 shillings (52 cents) a story, and sometimes months can pass without them getting paid.

“They become more desperate and end up looking for means of survival instead of serving the profession,” Imokola says. “It is even more dangerous to be a journalist upcountry.”

Mugira, the Vision Group producer, who has been a journalist for 17 years, agrees that some journalists may be under pressure to accept money from sources because they don’t usually have fare back to work after reporting. But he doesn’t entirely blame media houses for not paying their journalists enough.

“The media houses are not earning enough money, especially after COVID-19,” he says. “What should they pay us with?”

Mugira says that on average media houses make monthly profits of about 10 million shillings ($2,620) and that many don’t break even, yet have to pay operational costs like water and electricity. But he admits some media houses might engage in unfair employment practices and not pay their workers adequately.

“Sometimes profits are prevailing over principles, and some media houses are turning a blind eye on ethical violations because they need to keep operating,” Mugira says. “The only way they are going to take responsibility and provide their journalists with the tools needed to produce quality journalism is if they are compelled to do so.”

But Mugira says he’s more optimistic about the future of journalism in Uganda because most journalists are principled people who entered the field because they believe they are providing an essential public service. He says over the years he has seen young journalists evolve to value the nobility of the profession, especially as more of their stories land on front pages and benefit society.

Some journalists go as far as accepting gigs as masters of ceremonies for corporate events to supplement their incomes and avoid having to accept money from sources.

“I have seen journalists go to events and press conferences and decline to sign forms when organizers offer them money,” Mugira says.

Sarah Mubiru, an editor at TV West, says the issue is more complicated because not all journalists agree on brown envelopes. She doesn’t think accepting money from sources always equals a bribe and believes journalists are capable of using their discretion to distinguish between a bribe and a token of appreciation for covering an event.

“It is a bribe when a payment is given to a journalist to prevent coverage of a story, or to write favorably about an event,” Mubiru says. “If when a function is over an organization gives each participant a brown envelope, it is acceptable for a reporter to take the money.”

Mubiru says it is up to media companies to develop policies to safeguard the integrity of their journalism. Her employer, for example, has a policy that reporters must declare when they receive more than 100,000 shillings ($26) from a source and will fire any journalist found to demand money for killing a story or for writing a favorable one.

“Those who have ever asked for money have been suspended and others have their contracts terminated,” she says.

Gerald Walulya, a lecturer at the Department of Journalism and Communication at Makerere University, says journalists’ lack of agreement that taking brown envelopes from sources is unethical is a reflection of how normalized corruption has become in Ugandan society.

“Journalists have lost sensitivity,” he says. “When other sectors of society are corrupt, it is likely that journalists will also be corrupt. When you teach ethics and they don’t see it being practiced in society, they don’t take it seriously.”

Walulya says that although some media houses have tried to limit what journalists can accept as gifts, even the smallest amount of money can serve as an indirect form of bribery and may compromise the journalist.

“If someone gives you 50,000 shillings [$13], there is a natural feeling that you need to return a favor,” Walulya says.

Walulya, who worked as a journalist in both local and English media before going into academia, also rejects the notion that only young people who are new to journalism and don’t earn enough accept brown envelopes. He says he has seen journalists who earn a lot of money take bribes.

“Newsrooms need to constantly remind journalists of these ethical concerns but also try and remunerate them fairly,” Walulya says.

Although Akiza feels he is not well compensated, given the amount of time and energy he puts into his work, he says he is confident that no amount of money from a source could compromise the integrity of his work. But he admits that, given how hard it is to get his work done, he doesn’t rule out the idea of accepting a brown envelope from a source, when it is also given to everyone who attends an event.

“As long as it is in good faith, it cannot compromise my ethics,” he says. “We know we are not supposed to be used by people for their own interests, so we should do the right thing at the end of the day.”