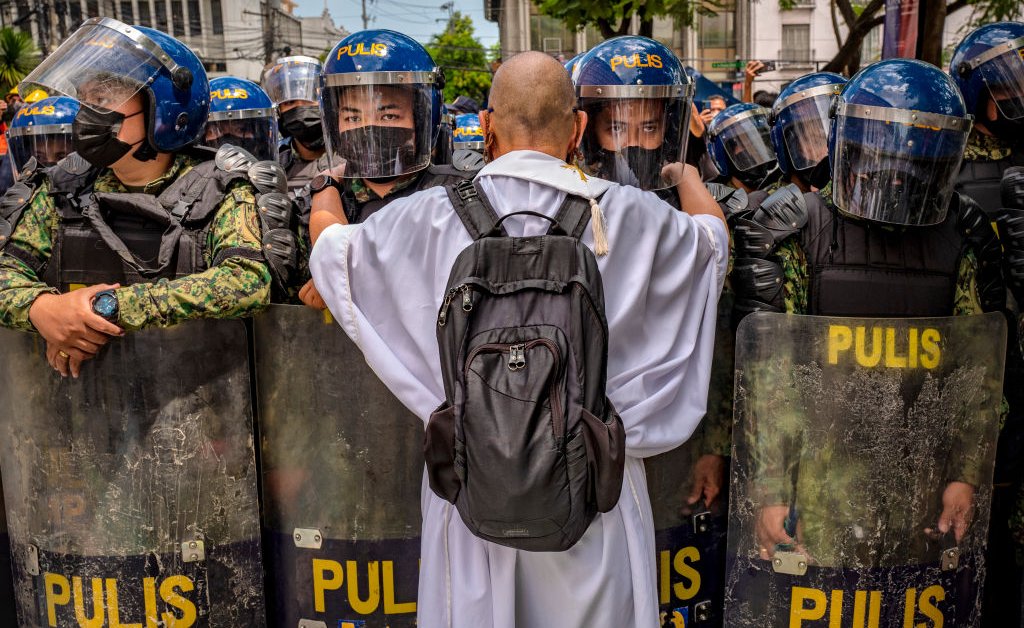 The late Catholic Metropolitan Archbishop of Manila, Jaime Cardinal Sin (1928-2005), liked playing up to the inevitable jokes about his name. “Welcome to the house of Sin,” used to be his mirthful greeting to guests at his official residence. But there was nothing humorous about his voice when he appeared on Radio Veritas, the Church’s broadcasting arm, on the night of Feb. 22, 1986.

He was not on the air to deliver a homily or prayer. Instead, Sin told listeners that two high-ranking military defectors were holed up in Camp Aguinaldo, a military base just northeast of the Philippine capital. He asked the faithful to surround the camp and protect the men from troops loyal to the country’s brutal dictator, Ferdinand Marcos.

“If any of you could be around Camp Aguinaldo to show your support in this very crucial period, when our two good friends have shown their idealism, I would be very happy if you could support them now,” Sin said.

Read More: The Rise, Fall and Rise of the Marcos Family

Not long afterward, thousands of civilians began showing up at the camp’s perimeter, kickstarting what would become known as the People Power Revolution—a bloodless democratic uprising still lauded as an example of what a determined people can do.

Over the coming days, nuns could be seen in the streets, praying over their rosary beads as they placed flowers in the barrels of soldiers’ guns. Priests mediated between angry protesters and fraught military men. As one of the few media outlets to have survived Marcos’ crackdown on the press, Radio Veritas broadcast minute-by-minute coverage of the uprising. On the evening of Feb. 25, Marcos fled with his family to exile to Hawaii, where he died in 1989.

The Philippine Church had ousted a dictator.

Catholic devotees attend an Ash Wednesday service in the cathedral at Antipolo City, Philippines, on March 2, 2022.

Catholicism and politics in the Philippines

Catholicism in the Philippines is a legacy of Spanish colonial rule, which ended in 1898, and today at least 80% of the country’s 110 million people profess the religion. They form the third-largest Catholic population in the world, after Brazil and Mexico, and the largest Catholic congregation in Asia.

Some 71% of Filipino Catholics consider religion to be very important in their lives. With the glaring exception of the autocratic Rodrigo Duterte, who became president in 2016, politicians have unsurprisingly sought the blessing of the Church.

“It goes to show how it is strategic for politicians to be seen as religious,” says Jayeel Cornelio, a sociologist of religion at Ateneo de Manila University.

But while Catholic organizations in the Philippines have been capable in the past of organizing effective opposition to legislative measures that go against Church teachings—on matters such as same-sex marriage and abortion—the Church’s political power appears to be waning today.

In the run-up to the 2022 presidential elections, Clergy for the Moral Choice, a group of more than 1,000 Catholic clergymen across the archipelago, endorsed the progressive candidate, Maria Leonor “Leni” Robredo, against her rival, Ferdinand Marcos Jr.—the son of the late dictator. Days after the May 9 polls, it became clear that Church backing hadn’t worked. Though he has not yet been officially declared the winner, Marcos Jr. is ahead in the vote count by a huge margin.

Much of his success has been credited to the social media campaign waged by his mostly youthful supporters, who spread misinformation on platforms like TikTok to whitewash the Marcos family’s notorious legacy. The Church has been simply outgunned.

Read More: Why the World Should Be Concerned by the Marcos Victory

Monsignor Melchor David, a parish priest in the diocese of Parañaque and a member of the Clergy for the Moral Choice, says that during the time of the elder Marcos, Catholic media had “more reach, compared to now, when the trolls have more reach.”

Evangelical megachurches are also competing with the Catholic Church for influence. One such group, the Kingdom of Jesus Christ, was founded by Apollo Carreon Quiboloy, who is on the FBI Most Wanted list for alleged child sex-trafficking. The group endorsed Marcos Jr.’s presidential bid and a TV station it owned, SMNI, hosted the only presidential debate that the candidate attended.

The debate on birth control has been another reality check. The Catholic Bishops Conference of the Philippines (CBCP) strongly opposed the passage of a law mandating the public availability of contraceptives, despite a March 2014 survey that showed more than 70% of Filipinos in favor of the law, and 84% believing it a government duty to provide free family planning to the poor. Despite the bishops’ objections, the law was fully enacted in 2021.

“It showed the limits of the institution when it comes to politics,” Cornelio tells TIME. “The political leadership of the Catholic Church has evolved in such a way that it is no longer the moral conscience of the nation. It was in the 1970s and the 1980s. Today, that seems to be quite a big assumption to make.”

Outgoing president Duterte meanwhile lashed out at the Church for most of his term—normalizing what were once unthinkable attacks on a sacrosanct institution. He called Pope Francis a “son of a whore” for causing traffic jams during a pontifical visit in 2015. When the Church began speaking out against the brutality of Duterte’s war on drugs, he showered bishops and priests with expletives. He even made crude remarks about raping a Australian nun killed in a prison riot.

The Philippine Church under Marcos Jr.

The incoming administration looks set to continue an antagonistic stance toward the Church. Days after the CBCP’s president, Bishop Pablo Virgilio David, wrote a pastoral letter warning against any betrayal of the People Power Revolution, a spokesman for Marcos Jr. accused the Church of “meddling” in politics, saying clergymen had “abused the pulpit.”

Father Jojo Gonda, from the southern province of Batangas, says the clergy has come under “massive attacks” from pro-Marcos parishioners. “They get mad at us priests who are supporting [Robredo], and they’re not saying good things about us.”

But the decline of the Church’s political clout doesn’t have to be irreversible. The sociologist Cornelio believes its ability to mobilize on a community level, and its consistent moral positions in an era of technology-driven change, give it an edge.

Read More: Why the West Will Work With Ferdinand Marcos Jr

“If disinformation is our problem, then you need incisive, extensive and respectful conversations at the level of communities,” he tells TIME. “That’s how you combat misinformation.”

Father John Era, a 50-year-old seminarian in Quezon City, says he was too young to participate in the uprising against Marcos Jr.’s father, recalling that he felt jealous of those who were able to be part of the “celebration.” Now however, he says he has “Gospel truth” on his side and will defend it if necessary.

Seeing Marcos Jr. elected, Father John says, has made him relive the emotions of 1986. “I failed to participate then,” he tells TIME. “I want to now.”