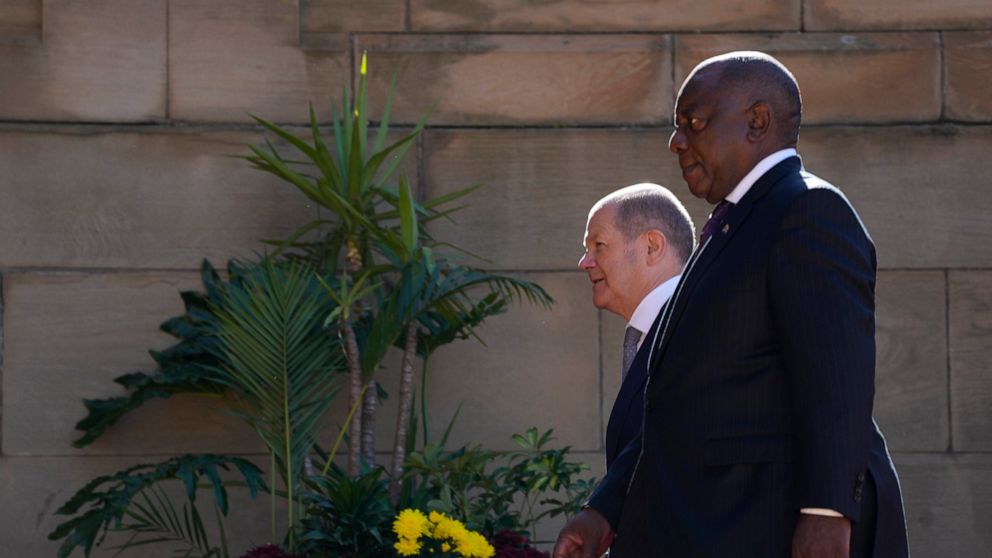 South Africa’s neutral stance on Russia’s war in Ukraine will be a major topic of conversation as German Chancellor Olaf Scholz meets Tuesday with South African President Cyril Ramaphosa, to end his three-nation tour of Africa

Speaking to the press in South Africa’s capital, Pretoria, ahead of their private meeting, the two leaders said they will also consider developments on the African continent. Scholz’s visit comes as the war in Ukraine has been raging for three months and is causing oil and food prices to rise around the world, including in Africa.

South Africa has taken a neutral stance on the conflict, refusing to condemn Russia’s actions and calling for dialogue between the two countries.

Scholz said Russia’s invasion of Ukraine was an important issue to discuss with his South African counterpart.

“Obviously one of the questions that is of big concern for all of us, is the war that Russia imposed on Ukraine, the brutal war, we have to say it like this,” Scholz said.

“And it is necessary for peace in the world that this war stops, as soon as possible and that there is a chance to defend the integrity and sovereignty of Ukraine,” he said.

Another topic to be discussed is South Africa’s intention to reduce its dependence on coal-fired power plants. Germany is among the countries that pledged up to $8.5 billion at the COP26 climate change conference last year to help South Africa reduce its reliance upon coal to generate electricity. So far there have been no announcements of actual payments of those funds to South Africa.

South Africa is currently suffering nationwide rolling power cuts because its coal-fired power stations are unable to generate adequate amounts of electricity. The promised funds will help the country, which has Africa’s most developed economy, to shift to more environmentally friendly energy, Ramaphosa said.

“We anticipate constructive discussions around the green economy, clean energy and building climate resilience as we embark on new technologies such as hydrogen, and various other renewable energy technologies,” Ramaphosa told the press.

Scholz arrived in South Africa after visiting Senegal and Niger, where he expressed Germany’s interest in gas exploration opportunities in Senegal and his country’s long-term military and financial assistance to Niger.