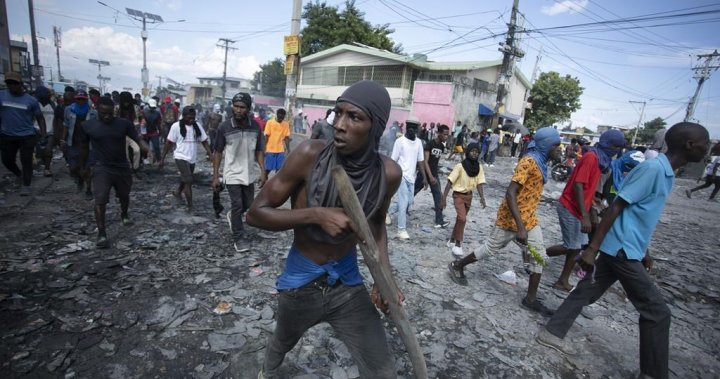 The United States and Canada — the two countries most often mentioned as possible leaders of an international armed force to help Haiti combat gangs — showed no interest Tuesday in deploying security personnel despite renewed appeals from the United Nations and Haiti for help to end worsening violence in the Western hemisphere’s poorest nation.

U.S. deputy ambassador Robert Wood told the U.N. Security Council that “Haiti must address its continued insecurity challenges,” and he encouraged the international community to support its efforts.

Canada’s U.N. Ambassador Bob Rae said the world needs to learn from all previous military interventions in Haiti, which failed to bring long-term stability to the country, and ensure that in the future solutions “must be led by Haitians and by Haitian institutions.”

Haitian Prime Minister Ariel Henry and the country’s Council of Ministers sent an urgent appeal Oct. 7 calling for “the immediate deployment of a specialized armed force, in sufficient quantity” to stop the crisis caused partly by the “criminal actions of armed gangs.”

Helen La Lime, the U.N. special envoy for Haiti, reiterated the secretary-general’s appeal, telling the council that “gang-related violence has reached levels not seen in years.”

Murders and kidnappings increased for a fourth straight year in 2022, she said, pointing to 1,359 kidnappings, more than double the number in 2021 and averaging roughly four per day, and murders up a third to 2,183, touching all segments of society including a former presidential candidate and the director of the National Police Academy.


On the political front, La Lime said, the expiration of the mandate of the last 10 senators holding office on Jan. 9 means “there is not one elected official left in the country.”

While this poses a “profound challenge,” she said, it is also an opportunity for Haitians to look at the root causes of dysfunction in the country and address them.

The U.N. envoy pointed to two key developments: the Security Council’s unanimous adoption in October of a resolution imposing sanctions on individuals and groups threatening peace and stability in the country starting with a powerful gang leader, and the Dec. 21 signing by a broad range of political, civilian, religious, trade union and private sector officials of a “National Consensus Agreement for an Inclusive Transition and Transparent Elections.”

The agreement sets out a calendar for installing an elected government by February 2024 including immediate steps to promote fiscal reforms and increase state revenues, La Lime said. A High Transitional Council has been named which will work with the government to make nominations to the country’s highest court, she said.

La Lime said the agreement, whose adherents are growing every day, is “the most promising sign to emerge from dialogue efforts until now.” With the U.N. sanctions, it “offer a clear path to the restoration of democracy and legitimacy,” she said.

But La Lime said the deployment of an international specialized force is an essential third element needed to reinforce the police, sanctions and the transition.

Without an international force, she said, “the very positive effects of the political process and the sanctions so far, will remain fragile and vulnerable to being reversed.”

Haiti’s U.N. Ambassador Antonio Rodrigue cited ongoing efforts to implement the agreement but called the current situation “an emergency” and warned that restoring security is a prerequisite for the country to move forward.

“Without security, we cannot have fair, transparent and democratic elections nor can we restore the normal functioning of institutions in the country,” he warned.

Rodrigue urged the international community to respond to secretary-general Guterres’ renewed call for the immediate deployment of an international force “to help us suppress the gangs and allow us to finalize the process of bringing democratic order back to our country.”

“This is an imperative right now,” Rodrigue said. “We cannot wait and the security situation could worsen any day, and worsen the fate of the people who are already suffering terribly.”

As for suffering, U.N. envoy La Lime told the council that gangs have intentionally blocked access to food, water and health services — during the current cholera outbreak — and close to 5 million Haitians across the country are facing acute hunger.