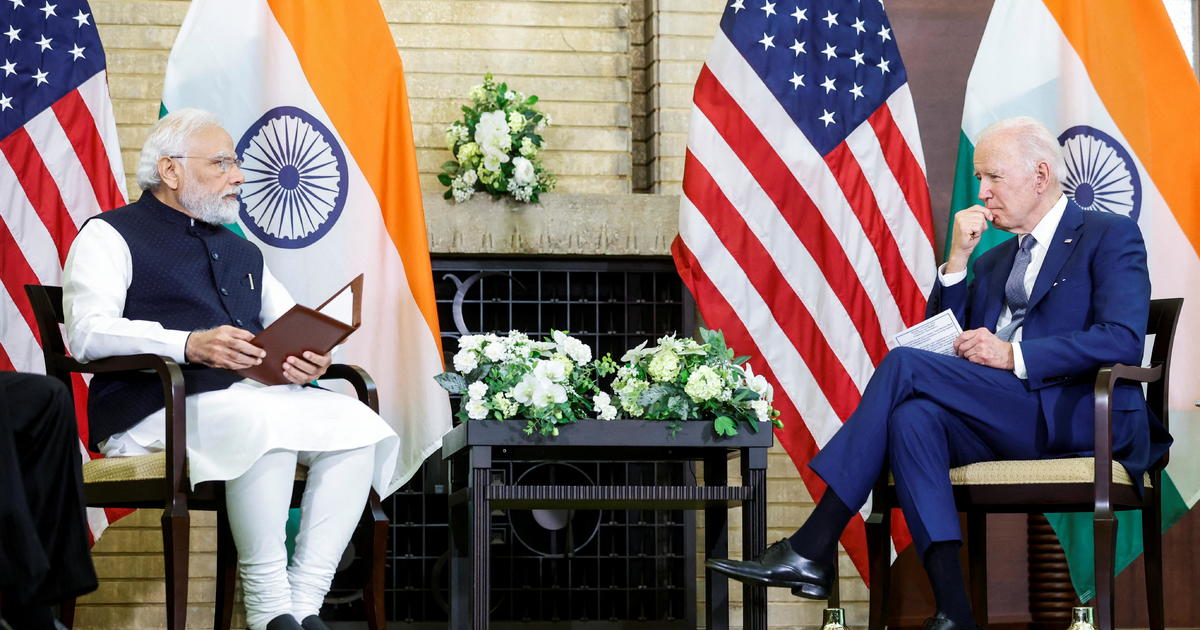 Tokyo — President Joe Biden told fellow Indo-Pacific leaders assembled for a four-country summit Tuesday that they were navigating “a dark hour in our shared history” due to Russia’s brutal war on Ukraine and he urged the group to make greater efforts to stop Vladimir Putin’s aggression.

“This is more than just a European issue. It’s a global issue,” Mr. Biden said as the “Quad” summit with Japan, Australia and India got underway.

While the president didn’t directly call out any countries, his message appeared to be pointed, at least in part, at Indian Prime Minister Narendra Modi, with whom differences persist over how to respond to the Russian invasion.

Unlike other Quad countries and nearly every other U.S. ally, India hasn’t imposed sanctions or even condemned Russia, its biggest supplier of military hardware.

With Modi sitting nearby, Mr. Biden made the case that the world has a shared responsibility to do something to assist Ukrainian resistance against Russia’s aggression.

“We’re navigating a dark hour in our shared history,” he said. “The Russian brutal and unprovoked war against Ukraine has triggered a humanitarian catastrophe and innocent civilians have been killed in the streets and millions of refugees are internally displaced as well as in exile.”

“The world has to deal with it and we are,” he added.

As the leaders were meeting, Russian and Chinese fighter jets conducted joint flights over the Sea of Japan and East China Sea, Japan said, according to Agence France-Presse. Japanese Defense Minister Nobuo Kishi said Tokyo expressed “grave concerns” about the flights to Moscow and Beijing.

Looming over the Quad leaders’ talks was Mr. Biden’s blunt statement on Monday that the U.S. would intervene militarily if China were to invade Taiwan, saying the burden to protect Taiwan is “even stronger’ after Russia’s invasion of Ukraine. The White House insists that Mr. Biden’s unusually forceful comments about Taiwan didn’t amount to a shift in U.S. policy toward the self-ruled island that China claims as its own.

Mr. Biden was asked Tuesday if the policy of “strategic ambiguity” toward Taiwan was dead. He responded, “No.”

He was then asked to elaborate and again said “No.”

Another reporter asked if the president would send troops to Taiwan if China invaded.

Mr. Biden replied that, “The policy has not changed at all. I stated that when I made my statement yesterday.”

It was the second time within a year that Mr. Biden has left people questioning his administration’s stance on the long-held, unofficial U.S. government policy of “strategic ambiguity” on Taiwan. In October 2021, after being asked during a CNN Town Hall in Maryland whether the U.S. would defend Taiwan in the face of an attack by China, he said: “Yes, we have a commitment.”

Strategic ambiguity is a term describing Washington’s efforts to keep China guessing about how the U.S. actually would react if China were to invade Taiwan, in the hope such uncertainty could act as a deterrent to such an invasion.

The White House has been effusive in its praise of several Pacific countries, including Japan, Singapore and South Korea, for stepping up to hit Russia with tough sanctions and export bans while offering humanitarian and military assistance to Kyiv.

For several of the bigger Asian powers, the invasion has been seen as a crucial moment for the world to demonstrate by a strong response to Russia that China should not try to seize contested territory through military action.

The White House has been disappointed with the relative silence of India, the world’s biggest democracy.

Mr. Biden has asked Modi not to accelerate the buying of Russian oil as the U.S. and other allies look to squeeze Moscow’s energy income. The Indian prime minister made no public commitment to stop importing Russian oil, and Mr. Biden has publicly referred to India as “somewhat shaky” in its response to the invasion.

Facing Western pressure, India has condemned civilian deaths in Ukraine and called for an immediate cessation of hostilities. Yet it also has compounded fallout from a war that has caused a global food shortage by banning wheat exports at a time when starvation is a growing risk in parts of the world. The Indian prime minister didn’t address Russia’s war against Ukraine in his public remarks at the summit.

In comments to reporters after a one-on-one meeting with Modi, Mr. Biden said they discussed Russia’s invasion of Ukraine “and the effect it has on the entire global world order.” Mr. Biden added that the U.S. and India will continue to consult “on how to mitigate these negative effects.”

In his comments, Modi made no mention of the war in Ukraine, instead ticking off several trade and investment programs that he discussed with the president.

Mr. Biden has been making his case to Modi for weeks.

The two spoke about the Russian invasion during a virtual Quad leaders’ meeting in March, and last month they had a short video conversation when Secretary of State Antony Blinken and Defense Secretary Lloyd Austin met with their Indian counterparts in Washington.

“So it won’t be a new conversation,” White House national security adviser Jake Sullivan said ahead of the summit. “It will be a continuation of the conversation they’ve already had about how we see the picture in Ukraine and the impacts of Russia’s brutal invasion of Ukraine on a wider set of concerns in the world.”

While Mr. Biden and Modi may avoid public confrontation over how to respond to Russia’s aggression, the issue remains a major one as the U.S. and allies are looking to tighten the pressure on Putin, said Michael Green, senior vice president for Asia at the Center for Strategic and International Studies in Washington.

“It appears pretty clear the Mr. Biden administration is not looking for trouble with India and that most of these difficult conversations will be in private,” said Green, who was a senior National Security Council aide during the George W. Bush administration.

The summit came on the final day of Mr. Biden’s five-day visit to Japan and South Korea, Mr. Biden’s first trip to Asia as president.

Mr. Biden, Modi and Kishida welcomed Albanese to the club and expressed awe at his determination to join the informal security coalition so quickly after assuming office.

“I don’t know how you’re doing it,” Mr. Biden, who looked a bit worn from his own travel, told Albanese. The U.S. president joked that it would be OK if the new prime minister happened to fall sleep during the meeting.

Mr. Biden met separately with Albanese after the Quad meeting.

The four-way partnership has become increasingly relevant as Mr. Biden has moved to adjust U.S. foreign policy to put greater focus on the region and to counter China’s rise as an economic and security power. He held bilateral talks with summit host Kishida on Monday.

Albanese told his fellow Quad leaders he was dedicated to the group’s mission to maintain a free and open Indo-Pacific.

“We have had a change of government in Australia, but Australia’s commitment to the Quad has not changed and will not change,” Albanese said.

Some modest initiatives were announced by the Quad leaders, including a new effort to provide pediatric COVID-19 vaccines to countries most in need and a program to help nations improve security and environmental awareness of their territorial waters.

The Quad last year pledged to donate 1.2 billion vaccine doses globally. So far, the group has provided about 257 million doses, according to the Biden administration.