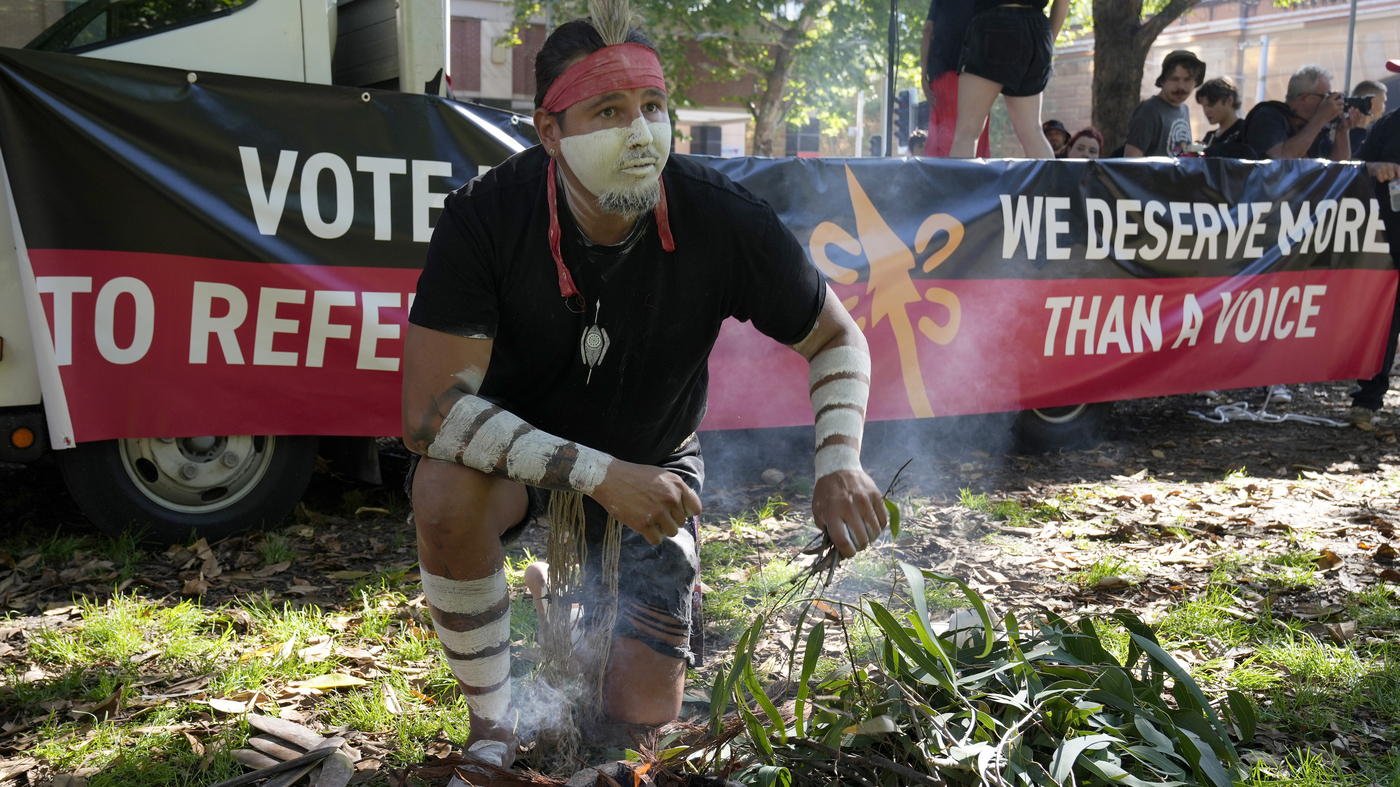 Aboriginal man Josh Sly of the Muggera Dancers prepares a fire for a smoking ceremony at the start of an Invasion Day rally in Sydney, Thursday, Jan. 26, 2023.

Aboriginal man Josh Sly of the Muggera Dancers prepares a fire for a smoking ceremony at the start of an Invasion Day rally in Sydney, Thursday, Jan. 26, 2023.

The government joined several large corporations in allowing staff the choice of taking the holiday off or working Thursday and taking another day off instead, in recognition of growing public unease at celebrating the 1788 hoisting of the Union Jack at Sydney Cove.

There are growing public calls to change the date of Australia Day, which is known to many Indigenous people as Invasion Day and Survival Day, because of the disastrous impacts on First Nations people of British colonists taking their land without a treaty.

The focus on Australia’s checkered European history ignited debate Thursday about a referendum due late this year that would create an Indigenous body known as the Voice to address Parliament on Indigenous issues.

The referendum, expected to be held between August and November, would enshrine the Voice in the constitution.

Prime Minister Anthony Albanese committed to the referendum on the day his center-left Labor Party government was elected in May last year.

Albanese said he wanted Indigenous people recognized as Australia’s original inhabitants in the constitution, which has existed since 1901, before next year’s Australia Day.

“If not now, when will this change occur? And if not the people of Australia this year, who will make this change which will improve our country, improve our national unity?” Albanese told reporters Thursday.

“It is a great country. Australia will be even better when we recognize our First Nations people in our constitution,” he added.

A dragonfly buzzes past a woman attending an Invasion Day rally in Sydney, Thursday, Jan. 26, 2023.

A dragonfly buzzes past a woman attending an Invasion Day rally in Sydney, Thursday, Jan. 26, 2023.

Noel Pearson, an Indigenous leader and longtime advocate of constitutional change, said the Voice would be a move toward a “settlement between the natives and those who took over the continent and established modern Australia.”

“This year is the most important year in the relationship between the natives of Australia and its so-called settlers in the 235 years since the landing of the First Fleet,” Pearson wrote Thursday in The Sydney Morning Herald, referring to the 11 British ships carrying convicts that established Sydney as a penal colony.

But reactions to the Voice are mixed, including among Indigenous leaders.

Jacinta Nampijinpa Price, an Indigenous senator for the conservative Nationals party, opposes the Voice. Her party supports her view that the Voice would divide Australia along racial lines.

Lidia Thorpe, an Indigenous senator for the progressive Greens party, on Wednesday threatened to oppose the Voice unless the referendum question includes acknowledgement that traditional owners never gave up their land.

Opposition leader Peter Dutton said his conservative Liberal Party needed more detail about what the Voice would entail before they could decide whether to support constitutional change.

“As you move around the community, it’s quite obvious that people don’t understand what it is that the prime minister’s talking about,” Dutton told reporters.

“They understand that changing the constitution is a big deal and, instinctively like me and like millions of Australians, we want a better outcomes for Indigenous Australians,” he added.

Indigenous Australians account for 3.2% of the population and are the nation’s most disadvantaged ethnic group. They die younger than other Australians, achieve lower education levels, are less likely to be employed and are overrepresented in prison populations.

They were not allowed to vote at federal elections until 1962, and Australian courts did not acknowledge until 1992 that their ancestors had legally owned the land when the British arrived.

Separately, thousands gathered in downtown Sydney to commemorate the 85th anniversary of the original Mourning Day protest in 1938 when demonstrators made demands, including citizen rights, for Indigenous Australians.