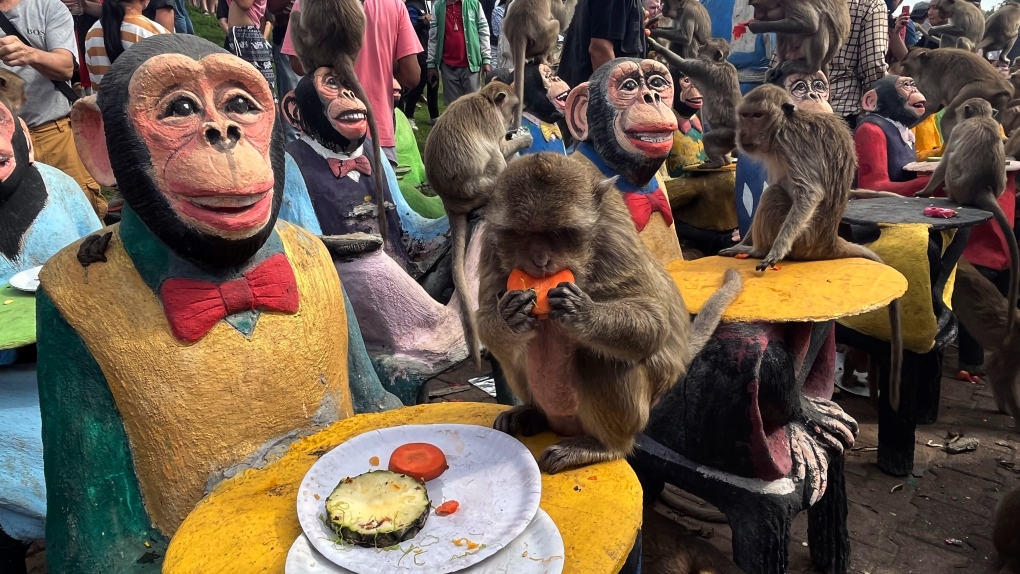 
A meal fit for monkeys was served on Sunday at the annual Monkey Feast Festival in central Thailand.


Amid the morning traffic, rows of monkey statues holding trays were lined up outside the compound of the Ancient Three Pagodas, while volunteers prepared food across the road for real monkeys — the symbol of the province around 150 kilometres (93 miles) north of Bangkok.


Throngs of macaque monkeys ran around, at times fighting with each other, while the crowds of visitors and locals grew.


As the carefully prepared feast was brought toward the temple, the ravenous creatures began to pounce and were soon devouring the largely vegetarian spread.


While the entertainment value of the festival is high, organizers are quick to point out that it is not just monkey business.


“Previously, there were around 300 monkeys in Lopburi before increasing to nearly 4,000 nowadays. But Lopburi is known as a monkey city, which means monkeys and people can live in harmony.”


Such harmony could be seen in the lack of shyness exhibited by the monkeys, which climbed on to visitors, vehicles and lampposts. At times the curious animals looked beyond the abundant feast and took an interest in other items.


“There was a monkey on my back as I was trying to take a selfie. He grabbed the sunglasses right off my face and ran off on to the top of a lamppost and was trying to eat them for a while,” said Ayisha Bhatt, an English teacher from California working in Thailand.


The delighted onlookers were largely undeterred by the risk of petty theft, although some were content to exercise caution.


“We have to take care with them, better leave them to it. Not too near is better,” said Carlos Rodway, a tourist from Cadiz, Spain, having previously been unceremoniously treated as a climbing frame by one audacious monkey.


The festival is an annual tradition in Lopburi and held as a way to show gratitude to the monkeys for bringing in tourism. This year’s theme is “monkeys feeding monkeys,” an antidote to previous years where monkey participation had decreased due to high numbers of tourists, which intimidated the animals.